This will be the president’s first interview with an outlet that isn’t Fox News in more than two months. Following his sit-down with NBC News’ Lester Holt in which he revealed that Russia was on his mind when he fired FBI Director James Comey, the president has done only a handful of television interviews with friendly Fox News.

The White House appears to view CBN as a sympathetic outlet for Trump. Early on in his presidency, Trump gave the Christian station an interview and the channel’s reporters were given questions at early news conferences, much to the consternation of mainstream news agencies.

As for Robertson itself, besides being a longtime supporter of Republican causes and politicians — to the point that he ran for the GOP nomination in 1988 — he’s also known for making his share of controversial and inflammatory comments.

After the Orlando mass shooting last year, the televangelist said maybe it would be best to let the LGBT and Islamic allies “kill themselves.” He’s also described ISIS beheadings as “maybe the best thing that ever happened to the world” and once told a grieving mother that her dead child could have grown up to be Hitler. And let’s not forget his prediction of deadly asteroid impact that never came to pass.

Golly gee, is anyone, anyone at all, surprised? We certainty aren’t.

Full article with links BELOW THE FOLD.

Save The Open Internet

Do your part, others have.

June 14, 2016: The U.S. Court of Appeals for the District of Columbia fully upheld the FCC’s net neutrality rules. Today’s ruling is a victory for the open, fair, and free Internet as we know it today — one that remains open to innovation and economic growth, without service providers serving as paid gatekeepers. It’s also a victory for the millions of Americans who made their voices heard in support of a free and fair Internet, with countless others speaking out on social media, petitioning their government, and standing up for what they believe.
February 26, 2015:The FCC just voted in favor of strong net neutrality rules to keep the Internet open and free. That happened because millions of Americans across the country didn’t just care about this issue: You stood up and made your voices heard, whether by adding your names to petitions, submitting public comments, or talking with the people you know about why this matters. Read a special thank-you message from the President, then learn more about how we got to where we are today. 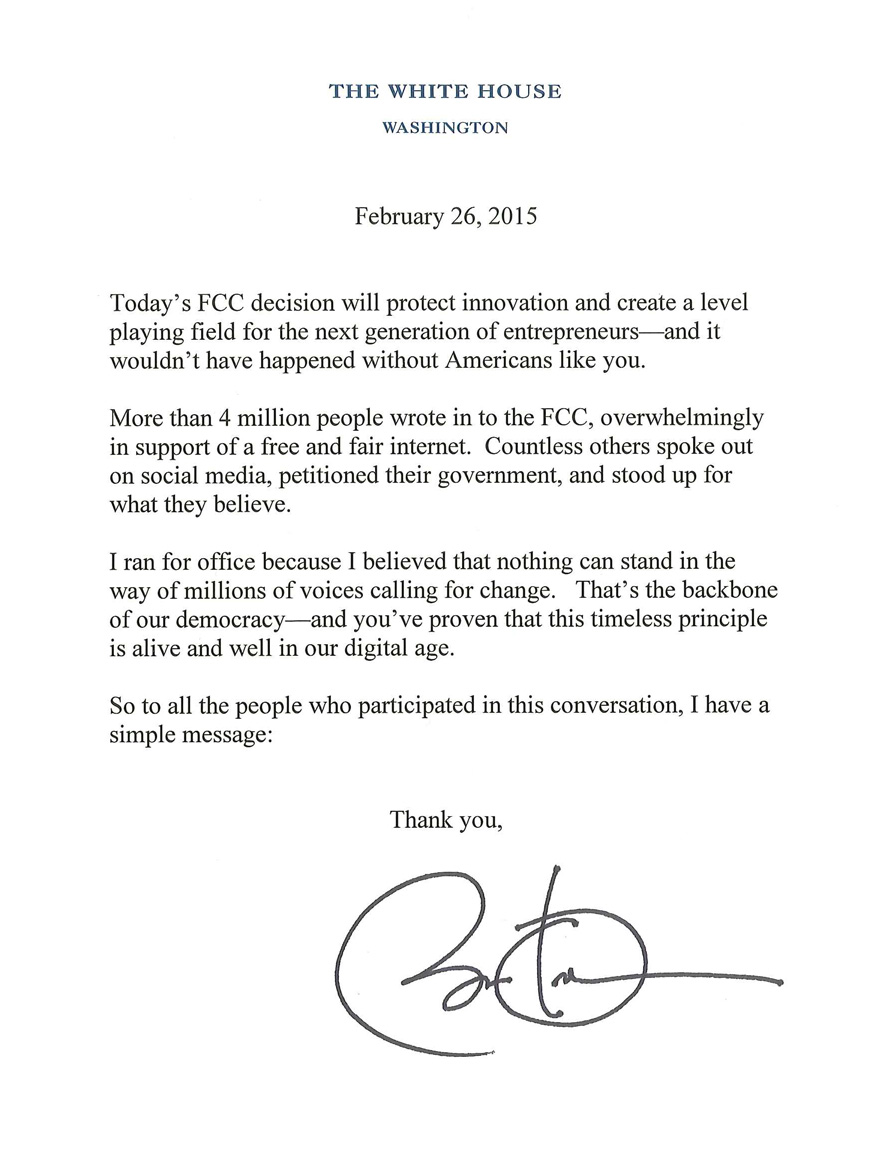