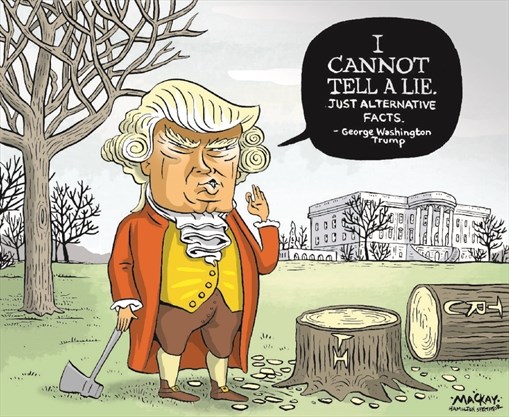 WASHINGTON (AP) — Boastful on the occasion of Memorial Day, President Donald Trump and his Veterans Affairs secretary are claiming full credit for health care improvements that were underway before they took office.

Trump said he passed a private-sector health care program, Veterans Choice, after failed attempts by past presidents for the last “45 years.” That’s not true. The Choice program, which allows veterans to see doctors outside the government-run VA system at taxpayer expense, was first passed in 2014 under President Barack Obama.

After more than 10,000 partial or total lies spoken by DJT since becoming “president”, we all should be fully used to his basic dishonesty. It’s his stock in trade. The majority of Americans know that Trump is an individual that cannot be trusted. He is a pathological liar. A person who believes whatever he has floating around in his cranial cavity is true.

For Trump, whenever he is displeased with the truth, he simply fabricates a story line he believes will make him look good. It has worked well for him all his life and apparently continues to work for him in his political life. Forty plus percent of the voting public continue to support him. Over 90% of republicans think his dishonesty is just peachy.