The greatest test of the strength of our nation’s foundation is not yet over.

If all the good folks of this country stand together and do not lose their resolve whether impeachment results in removal or not won’t matter. Trump’s sorry arse will be run out of Washington when he loses reelection in 2020.

What Goes Around Comes Around Trump…

The unvarnished truth about Trump and his toadies.

There’s been a lot of failure in American politics these last four years, but has there been any more miserable and embarrassing than the alleged and, we now know, probably mythical “Resistance Inside The Trump Administration“?

Do you remember that? On Sept. 5, 2018 — barely a year ago, although it feels now like six or seven — a ranking member of the Trump administration published a remarkable, anonymous op-ed in the New York Times in which the author meant to assure the rest of America that — despite the downward-spiraling lunacy that we witness every day on our TV screen or in our Twitter feed — we should fear not because “many of the senior officials in his own administration are working diligently from within to frustrate parts of his agenda and his worst inclinations.”

Some 389 endless days later, we still don’t know who the writer is, but there’s one thing we can say with utter confidence. He or she is a coward. So, too, are literally dozens of other so-called public servants — many obscure, but some with the nation’s highest medals of valor pinned near their feckless, quivering hearts — who went to work each morning and watched an American president shred the Constitution and betray our fundamental values and yet chose to say nothing.

It took the great courage of one person — and two-thirds of an out-of-control president’s disastrous term in office — to show us how deeply the stench of fear otherwise permeated 1600 Pennsylvania Avenue. That one whistle-blower — maybe a CIA agent, but definitely an individual who did not check his or her moral compass at the White House front gate — has revealed Trump’s abuse of power, potential lawbreaking and casual willingness to solicit, and arguably extort, foreign election interference in his dealings with Ukraine. These revelations have brought Trump to the brink of impeachment and could topple the tottering Jenga of corruption that has been his administration.

Literally from Day One of Trump’s presidency, the millions of Americans worried about a president who seemed not just totally unprepared but often unmoored from reality were told that “the adults in the room” — a platoon of “the generals” as-seen-on-Trump’s-TV and some veteran political hands (Reince Priebus? … anyone still remember that guy?) — were there to make sure the 45th president didn’t wake up one morning and order a nuclear attack on Barbados or some such thing.

Indeed, these bastions of a serious and supposedly incorruptible permanent political establishment made sure they leaked to the permanent media establishment in D.C. that their steady hands were on the actual tiller even as Trump wildly spun his reportedly fake steering wheel on Twitter. Three of them — the ex-general Defense Secretary James Mattis, oilman Secretary of State Rex Tillerson and Wall-Streeter-turned-Treasury-Secretary Stephen Mnuchin — even put it out there (on background, of course) that their work in protecting America from their boss was so vital they had a sort-of-secret “suicide pact” to all quit if one of them was forced out.

So, if true, it is perfectly reasonable to ask, what in hell happened then?  Obviously like almost everything in Trump’s orbit it was just bullsh*t .

The fact that Mnuchin — perhaps still intoxicated from inhaling those rolls of freshly printed money — is still on the job long after Mattis and John Kelly are gone — and in fact covering upon the president’s income taxes — is one of your “tells” that the entire notion of adults in the room with Trump was a fairy tale comprised of unadulterated baloney. They said absolutely nothing for 32 months while the president of the United States played footsie with the world’s worst dictators — especially the one who gleefully interfered in the last presidential election — and with America’s white supremacists, and took active, improper, and possibly illegal actions to cover up his tracks. The adults acted like chickens. 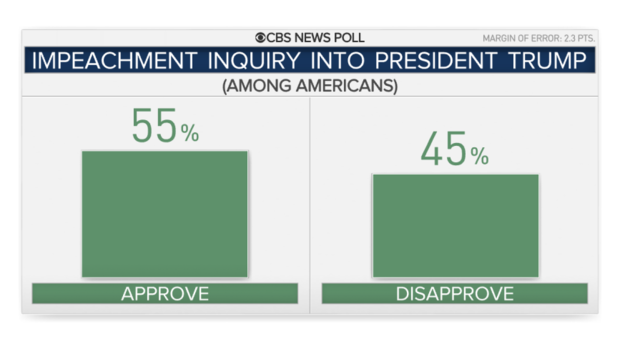 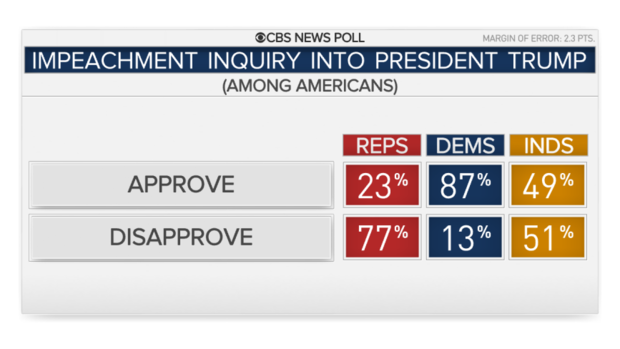 It is early and already a majority of Americans APPROVE of the impeachment inquiry into Trump’s alleged malfeasance.

As more evidence is uncovered, and you can bet the farm that more will be, the approval percentage will ONLY climb.

One of the beautiful things about our system of government is that it ultimately puts power in the hands of the Peoples Elected Representatives.

Let the Trump toadies in the Senate that continue to shill for, and support a corrupt and ineffective president (Trump) after the Peoples Representatives have impeached (they will)  suffer the consequences of defeat in their next campaign for reelection.

Country and the integrity of Country trumps (pun intended) party or individuals every time. But the goons in the GOP have sadly forgotten that truth. Let them pay a heavy price.

Giuliani using the rhetoric of a lying attorney in defense of their lying client. In this instance the “potus”.

POLITICO – On Sunday — armed with document after document that he held up to the camera — President Donald Trump’s personal attorney doubled down on his corruption charges against former Vice President Joe Biden and the connection between the Democratic Party and Ukraine. He also cast doubt on whether he would testify before a House panel.

During a contentious interview on ABC’s “This Week,“ Giuliani said, “I am defending my client the best way I know how. This is not about getting Joe Biden in trouble, this is about proving that Donald Trump was framed by the Democrats.”

Giuliani started his attacks on the Obama White House and Hillary Clinton’s 2016 campaign. He denied ever courting the theory that Ukrainians hacked the Democratic National Committee and then framed the Russian government. Pivoting, he said there was still “a load of evidence that Ukrainians created false information” for the Obama White House. He also alleged “the collusion that they claim happened in Russia happened in the Ukraine with Hillary Clinton.”

The broader agenda of the illegitimate “potus” and his perfidious attorney is to not only get Biden, but to cast as much fake doubt on the Obama administration and HRC as possible. Using false facts and unsubstantiated claims of impropriety  they deflect,

Axios has a theory on Trump’s MO when he is attacking his opponents, political or otherwise, and how he does it.

Personally it sounds like Trump is effectively employing the Fake News tactics he has spent numerous years accusing the legitimate news media of employing.

Interesting… As well as true

President Trump’s effort to paint Joe Biden as corrupt — debunked by fact-checkers — fits a pattern of Trump’s attacks on enemies: Raise deeply serious questions, regardless of what the facts say; hammer on those questions; never, ever seek finality.

Why it matters: Trump tries to plant seeds of suspicion and doubt, even if he doesn’t actually prove a case. He incubates the attacks in perpetuity, rather than seeking an actual resolution. But in Biden’s case, they’ve backfired in a way Trump couldn’t have imagined.

How Trump does it:

This is how Trump has worked for years — and not just when there’s an election opponent to beat:

For the full scoop on the poop read HERE.