The word of the Turkish President is about as trustworthy as that of “president” Dotard Trump.

… Ishak heads the Syriac National Council. A graduate of The Catholic University of America in Washington, he is also a member of the political bureau of the Syrian Democratic Council.

Ishak has warned for months about a possible Turkish military incursion to settle scores with its perceived enemy, the Kurds, who were staunch allies of the United States and largely responsible for successfully battling Islamic State militants in Syria.

Despite very strong bipartisan U.S. Congressional disapproval of President Donald Trump’s abrupt decision to pull back U.S. troops from northeastern Syria, the president did not back down. He said it was too costly to keep supporting Kurdish-led forces in the region fighting Islamic State militants.

Trump made the decision during a phone conversation with Turkish President Recep Tayyib Erdogan during which Trump was meant to pressure Erdogan over a purchase of Russian warplanes.

Instead, Erdogan got a pledge from Trump to pull back U.S. troops who had worked alongside the Kurds and Syriac Christians fighting Islamic State. This decision also went against the advice of officials at the Pentagon and State Department. Turkey took it as a green light to proceed with its incursion…

Trump is not fit to be president. He must be IMPEACHED and REMOVED NOW!

Trump has made his bed. It is now time he be made to sleep in it. Ideally for the remainder of his life.

What he has done to our nation, our allies, and our values is frankly unforgivable. PERIOD.

And now the Kurdish people, our allies in the long fight against ISIS, have been sacrificed to the invading army of Turkey by the US “president” Dotard Trump.

House Democrats are increasingly confident they have all the evidence they need to impeach President Donald Trump for obstructing their investigations.

Lawmakers say White House counsel Pat Cipollone’s letter sent Tuesday night to Speaker Nancy Pelosi — accusing Democrats of running an “invalid” and “illegitimate” impeachment probe — is the final insult in a long-running campaign of obstruction that will likely become a voluminous article of impeachment against Trump.

But they’re not prepared to impeach Trump on obstruction of Congress alone. As they contemplate their impeachment strategy, Democrats say they prefer any obstruction charge to play a supporting, rather than starring, role in their efforts.

“The [White House] letter isn’t an argument, it’s a diatribe. And it reflects what is a clear decision by the White House – obstruct, deny, stonewall,” Rep. Peter Welch (D-Vt.) said in an interview. “I think it would be a basis for proceeding but that doesn’t answer the question: Is it the time to proceed. Is the public there?”

Senior Democratic aides insisted lawmakers are still “finding the facts” and not seriously talking about writing specific articles of impeachment at this time, in part because Democrats are continuing to gather evidence against Trump. But Democrats readily agree that Trump’s blanket stonewalling of their investigations has veered into impeachable territory.

“There is a lot of evidence that is just staring us in the face,” said Rep. Val Demings (D-Fla.), a member of the House Judiciary and Intelligence Committees who has argued since April that Democrats have enough evidence to impeach Trump.

Trump has overseen efforts to defy House subpoenas for documents and testimony related to former special counsel Robert Mueller’s investigation of his campaign’s ties to Russia. Trump’s Treasury Department has refused to turn over his tax returns, despite a law permitting some lawmakers to obtain them. And Trump has helped scuttle other committees’ investigations of his alleged campaign finance violations, offers of pardons to immigration officials, administration officials’ use of private email for government business and political interference in the U.S. census.

“This total obstruction is a stand-alone basis for impeachment,” said Rep. Lloyd Doggett (D-Texas) on Twitter. “The House should proceed as soon as possible to impeach this lawless president and wannabe authoritarian.”

America is coming to its senses. 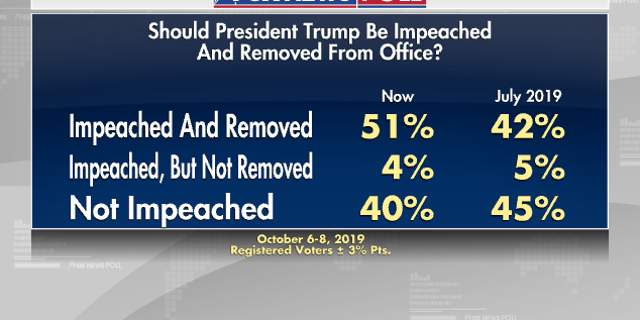 Vice Presidemt Joe Biden, on the heels of the Turkish invasion of Northern Syria, has called for the Impeachment and Removal from office of “President” Dotard Trump.

BEIRUT, Lebanon — Turkey sent warplanes and troops into northeastern Syria on Wednesday in a military operation aimed at flushing out an American-backed militia, Turkish and Syrian officials said.

The Turkish attack came amid a flurry of confusing policy statements from the White House, which on Sunday acquiesced to the operation, agreeing to move American forces out of the way, but on Wednesday, hours after it began, condemned it.

“The United States does not endorse this attack and has made it clear to Turkey that this operation is a bad idea,” President Trump said in a statement on Wednesday.

So President Dotard, if it’s a bad idea (it is) why in hell did you cave and give the Turkish strongman the go ahead?

Answer… Because you’re a dumb as* without an ounce of integrity.

Turkish fighter jets streaked through the sky over Syrian towns, while explosions from artillery shells boomed, causing traffic jams of terrified civilians fleeing south in trucks piled high with their possessions and children.

After about six hours of airstrikes, Turkish troops and their Syrian rebel allies crossed the border late Wednesday, the Turkish Defense Ministry, beginning a ground offensive.

At least seven people were killed in Turkish attacks on Wednesday, according to the Rojava Information Center, an activist group in northeastern Syria. The Syrian Observatory for Human Rights, a conflict monitor based in Britain, put the toll at eight.

Turkey’s long-planned move to root out United States-allied Kurdish forces in northeastern Syria has accelerated rapidly since Mr. Trump gave the operation a green light in a call with President Recep Tayyip Erdogan of Turkey on Sunday.

President Dotard Trump, you, in all you infinite wisdom and great stable genius-hood have singlehandedly destroyed the credibility of the government of The United States of America. After your brilliant move with the Turkish dictator no one in their RIGHT mind will trust us for at least a generation. Maybe longer.

“Pray for our Kurdish allies who have been shamelessly abandoned by the Trump administration,” Senator Lindsey Graham of South Carolina, usually a staunch Trump ally, wrote on Twitter. “This move ensures the re-emergence of ISIS.”

We all are hoping against hope that our BRAVE Kurdish ALLIES in the fight against ISIS will be spared a blood bath by the Turkish military.

We’re also hoping that maybe now YOU’LL pull your head from your as* and stop supporting Dotard.

Mr. Trump insisted Tuesday that “in no way have we abandoned the Kurds,” and on Wednesday said he firmly opposed the operation.

“Turkey,” he added, “has committed to protecting civilians, protecting religious minorities, including Christians, and ensuring no humanitarian crisis takes place — and we will hold them to this commitment.”

Admit it President Dotard Trump, you got rolled by a brighter and superior negotiator. That is ALL there is to it.

More on this ill advised move by President Dotard Trump.