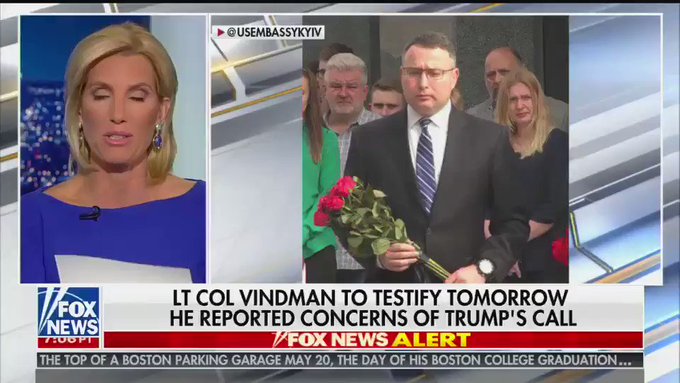 Trump is an embarrassment. He is an unhinged narcissist who thinks of nothing but himself and his businesses. A populist demagogue who’s demagoguery and propaganda rivals that of Adolph Hitler and the  Nazi party.

“Why are people that I never even heard of testifying about the call,” Trump tweeted. “Just READ THE CALL TRANSCRIPT AND THE IMPEACHMENT HOAX IS OVER! Ukrain said NO PRESSURE.”

Vindman will be the first witness in the impeachment probe who listened in on Trump’s call with President Volodymyr Zelensky. His testimony appears to corroborate both a whistleblower complaint lodged by an anonymous member of the intelligence community who was alarmed by accounts of the conversation, as well as a summary of the call released by the White House.

“Supposedly, according to the Corrupt Media, the Ukraine call ‘concerned’ today’s Never Trumper witness,” Trump tweeted, without providing any evidence that Vindman has an anti-Trump bias. “Was he on the same call that I was? Can’t be possible! Please ask him to read the Transcript of the call. Witch Hunt!”

“Where’s the Whistleblower? Just read the Transcript, everything else is made up garbage by Shifty Schiff and the Never Trumpers!” he tweeted earlier Tuesday morning, referring to House Intelligence Chairman Adam Schiff (D-Calif.), one of the leaders of the impeachment inquiry.

“The Do Nothing Democrats are working hard to make everyone forget the Best Economy Ever, the monumental weekend raid, Tax Cuts, the Rebuilding of our Military, etc.,” the president also wrote, touting the special operations assault that resulted in the death of Islamic State leader Abu Bakr al-Baghdadi. “The Impeachment Hoax is a disgrace. Read the transcript!”

The above is the president of our once great country. We can than The Donald and his supporters for our nations slide into chaos and declining relevance on the international stage.